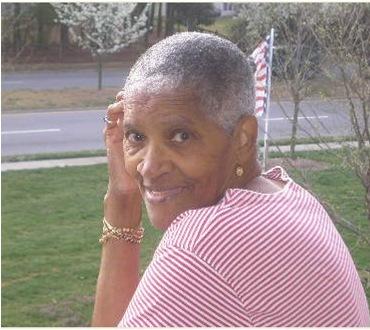 Elaine Virginia Brunn-Wood 83 passed away July 9, 2013 in Virginia Beach, Virginia. She is the daughter of the late Claude Brunn and the late Eldra Allen-Fabio. Besides her parents she is predeceased by her loving husband James E. Wood, her grandmother Augustine Galloway and her sister Barbara Green.
She is survived by her sons, Eberth Leslie Samuel Jr Donnell of Saint Cloud, FL and Michael Antonio Samuel of Virginia Beach, VA and Elaine’s sister Olympia Johnson, St. Cloud.
Seven Grand Children: Eberth Leslie Samuel III, Karyn Samuel- Cruz, Yvonne Elaine Samuel, Daniel Stephen Samuel, Kedar Hadad Samuel, Adam Jamal Samuel, Mikaela Rashida Samuel- Gilchrist.
Five Great Grandchildren: Savana Cruz, Domir Samuel, Mathew Cruz, Rahan Keimari Samuel and Kayden Omari Samuel
Extended Family: Rodney Samuel, Gary Samuel, Denise Samuel- Wiggins, Darryl Samuel, Wandra Samuel, Renwick Samuel, and Okeda Samuel, Tettley Gomez, Sonia Jennings, Rose Fletcher, Deneise Jennings-Houston, Yolanda Jennings, Garrison Vanderpool, Luis Samuel Jr.
Long Time Family Friends: Harriet Eason, Calvin Thorbourne, Inez Jackson, Zora Frances, Mavis Hennessey
Special Thanks to Donnell Kennedy, Carmen Milligan for all their Love & Support
Elaine was born in Santuce, Puerto Rico and raised in Puerto Rico by her grandmother Augustine Galloway. She went to school between Puerto Rico and St. Thomas, U.S. Virgin Islands. Her grandmother, affectionately called “Abuela”, moved with her to New York, where she was reunited with her mother Eldra and her two sisters at the age of 16. After a short while she met Bert Samuel and soon married.
She relocated to Brooklyn with her sons, where she began working in the garment industry as a sewing machine operator. She worked in many shops throughout Brooklyn and Manhattan. She was a proud and active member of the International Ladies Garment Workers Union ILGWU for many years. Being outspoken, Elaine began to gain the support of fellow workers and became the shop steward and union representative. She was also known to speak out for her fellow workers, mainly for the Black and Latino workers. She championed the cause of many worker concerns as part of the union. Elaine continued to work in the garment industry where she caught the attention of the union executives. She was selected to do public service announcements on Spanish radio. Elaine also appeared in local Spanish newspapers such as El Diario La Prensa and El Sol – Semanario de La Familia Hispana. She was also selected to make appearances to the Latino Workers from Puerto Rico, Colombia, Panama, Cuba, Costa Rica, and Honduras, and the Dominican Republic on behalf of the ILGWU as “Su Vecina y Amiga Elaine Wood Your neighbor and friend. Elaine received numerous certificates in recognition of assistance rendered and her steadfast championing of causes on behalf of her fellow union members, thus contributing to the economic well being of her community. Elaine was selected by the executive board of the Knitgoods Workers’ Union Local 155, to attend the Labor Education Center Institute of Management and Labor Relations seminar at Rutgers University in 1987. It was one of the highpoints of her involvement with the ILGWU.
Elaine experienced a setback in the early 80’s after being diagnosed with Cardiac Arrhythmias. Elaine retired from the work force and relocated to St. Croix U.S. Virgin Islands. She was able to rekindle old friendships with childhood friends from St. Thomas and St. Croix that have endured to this day. Elaine left St. Croix and relocated to Virginia Beach, VA in 1993. She spent some time living in Orlando Florida then returned to live in Virginia Beach, VA.
During the last years of her life, Elaine’s greatest joy was being involved with her grand children and great grand children.
In addition to having a great sense of humor, she was very generous, outgoing and had a vivacious personality. Elaine loved to dance. All who knew her knew her to be true to her character and personality. All she needed to do is hear music and she would get up and dance. She loved her cultural music of the Caribbean such as salsa, plena, bomba, merengue, soca and calypso. She also enjoyed the music of such greats like Ray Charles, Nat King Cole, Johnny Mathis, and The Drifters just to name a few.
As a mother, grandmother, great grandmother, and public figure, she accomplished a lot. We loved her and will miss her. Her sons will never forget her lasting and enduring words:
“Watching my sons grow up and become men with integrity is one of the most rewarding things a parent could ever hope for. To be part of your journey has been a privilege. To be a part of your lives, a priceless gift.”
Mother, Peace and Blessings be upon you and May Allah be contented with you.
Your Sons, Leslie and Michael

My deepest condolences to the family. Losing a dear loved one can leave a very empty space in one’s life. Please find strength, hope, and comfort in the God of Comfort 2 Corinthians 1:3, 4.