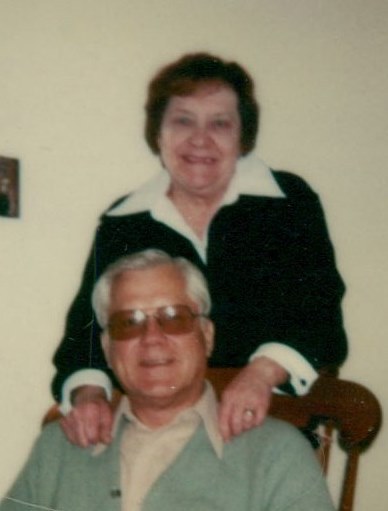 Oakland, Edward Charles, 92, of Moundsville, WV, died Wednesday, October 9, 2013 in Wheeling Hospital, Wheeling, WV.
He was born March 24, 1921 in Glen Dale, WV, a son of the late William and Blanche Wyrvich Oakland.
Mr. Oakland was a retired employee of the former Louis Marx Toy Co., where he was a foreman in the Blow Mold department, and a member of St. Francis Xavier Catholic Church, Moundsville. He was a U.S. Army veteran of WWII and a lifetime member of the VFW Post 437, Moundsville.
In addition to his parents, he was preceded in death by his wife, Helen Key Oakland; a brother, Arthur Oakland; three sisters, Helen Lautar, Stella Dugas and Martha Jane Malchano.
Surviving are his daughter, Carol Haglock and her husband, Albert A. “Buddy”; sisters-in-law, Betty Key and Marie Lohri, both of Glen Dale, Alice Diaz of Kettering, OH, Carol Chambers and Carmina Oakland, both of Moundsville; a brother-in-law, Anthony “Butch” Barb Key of Glen Dale; several nieces and nephews.
Special thank you for the care given by Linda Gray, who treated Dad with kindness and dignity,
Friends will be received from 4-8 pm Sunday at the Altmeyer Funeral Home, Lutes & Kirby-Vance Chapel, 118 Grant Ave., Moundsville.
Mass of Christian Burial will be celebrated at 10:00 am Monday, October 14, 2013 at St. Francis Xavier Catholic Church, Moundsville, with Rev. Raju Antony as celebrant.
Interment in Riverview Cemetery, Moundsville, where the Moundsville Honor Guard will provide military graveside services.
Memorial contributions may be made to St. Francis Xavier Catholic Church, Moundsville.
Online condolences may be expressed at altmeyer.com.

Please accept our whole family’s condolences on the loss of your dad.

I have many fond memories of Uncle Eddie, he was a very special uncle, whose memory always makes me smile.

What a ripe age Mr. Oakland was blessed to see with special mightiness. I can imagine the stories he would relate as he saw the world make many changes. Cherish the memories that pain can’t steal. May family and friends give support to help you heal.

When I was little and we would go to Moundsville to visit Grandma Key, I always loved when Uncle Eddie stopped by to see us. I always thought and still do that he was the nicest guy. My sympathies to Carol and Buddy. You’re in my thoughts.