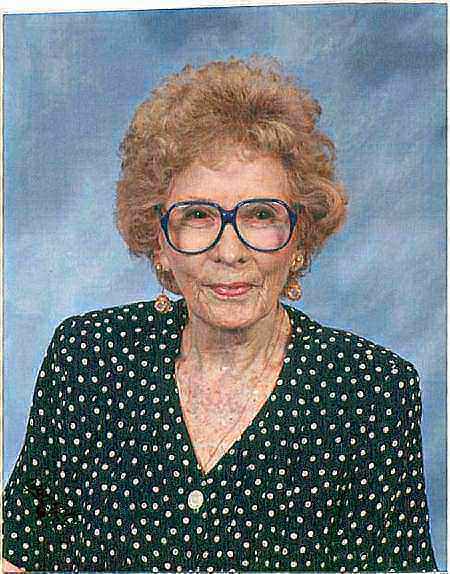 October 18 2002 the service will be at First Lutheran Church Warren, PA

October 18 2002 the service will be at First Lutheran Church Warren, PA

Doris S. Benze
Norfolk- Doris Sylvia Armstrong Benze, 91, most recently of Norfolk, died early Sunday, October 13, 2002, after a brief illness. She was born in 1911 in Burning Well, McKean County PA, the youngest child of the late Mark and Georgianna Dupree Armstrong. For most of her early life, Doris lived in Warren, PA. She married John Warren Benze in 1936, a love story that began one snowy night when John was stranded at the soda fountain where Doris worked. They were wed by John’s father and uncle, both Lutheran ministers, in the church John’s grandfather, also a Lutheran minister, had built in 1876. In the years that followed, Doris enjoyed working with the public in the office supply business and later in retail women’s clothing sales. In 1968, after having raised their three children, Doris and John moved to Biloxi, Mississippi, when the opportunity arose for John to make a late life career relocation. John died shortly thereafter, and Doris created a full life for herself, continuing to work in the office supply business and pursing her love of music. Her musical journey had begun as a teenager, studying the violin and playing for churches, often playing two different services at separate churches on Sundays. She was a longtime member of the Warren Civic Orchestra and, after moving to Mississippi; she played with the Gulf Coast Symphony, the Pascagoula Orchestra, and the Mobile Opera Company. Teaching the violin to young students was especially gratifying to her.
In 1994, Doris came to live in Norfolk, to be close to family. She was a member of the First Lutheran Church and enjoyed involvement with the Older Adult Program at Jewish Family Service, made particularly special by the company of her friend, Dean. She maintained her youthful spirit and continued to make friends wherever she went.
In addition to her husband, Doris was predeceased by her brother, Clayton Armstrong, and two sisters, Addie McWilliams and Aileen Schrecongost, all of Pennsylvania. She is survived by her children Robert J. Benze, and his wife, Joan, of Silverdale, WA; Jay W. Benze and his wife, Mary of Albuquerque, NM and Jean B. Schlichter and her husband, Jeff, a devoted son-in-law, of Norfolk. Other survivors include her loving grandchildren, John Benze, James Benze, Jeanne Tunell, Pattie Salls, Mike Benze, Emily Schlichter and Erika Schlichter. She was also "Grandma" to Suzanne Delacey, Linda Delacey, Craig Delacey, and Carrie Delacey, in addition to being the proud great-grandmother of Ashley and Dustin Salls, Krista Benze, Lorenzo Petroncelli and Nicole Lord. She will be remembered by her brother-in-law, James G. Benze of Parma, OH, many nieces and nephews and her Biloxi friends. She will be missed by her longtime "adopted family" friends who relocated to the U.S. from India, Usha, and Dinesh, and from Kuwait, Aban and Jamshed. They still refer to her as "mother" from the days she and John opened their home to acquaintances he made during business trips to India. She remains in the memories of friends around the country who she met during a trip around the world with her late sister-in-law, Estelle Benze in 1975.
Doris’ family is grateful for the many kindnesses extended by members of First Lutheran Church of Norfolk and Jewish family Service of Tidewater. Memorial donations may be made to either. Thanks go also to the impeccable medical care provided by Dr. Julie Damman through the final years of Doris’ life.
A funeral service will be held on Thursday October 17, 2002 at 11:00 a.m. at First Lutheran Church, Norfolk, VA
A Memorial service will take place on Friday October 18, 2002 at 1:00 p.m. at First Lutheran Church in Warren, PA followed by interment at Warren County Memorial Park at 2:00 p.m.

I just wanted to let you know how saddened we were to learn of Aunt Doris’s passing. I can still remember our many trips to Warren when I was young and how Uncle John and Aunt Doris would always give me a coke a real treat back then when we visited.

I also remember the many stories my Mom and Dad would tell about how they’d leave Ashtabula late on a Friday and head to Warren where the the four of them would go out on the town.

You have our condolences and best wishes.

Grandma! I cannot believe you have been gone for a year now. I do miss you very much. Your memory will forever live on in your family. I will cherish all that you have given me in my life and hope to inspire my children with your gifts as well. I love you!

Hi I’m Darren Endris from Biloxi and I was one of Doris’s violin students. I knew Ms. Doris for the better part of my young life and I am both heart broken and yet joyfull that god has called home one of his angles. I know she was both been very inspirational and loved by every persons life she touched. My thougths goes out to the family of Ms. Doris for the lose they must be feeling in thier heart’s for such a bright point of thier lives. I just wanted to let you know that she touched my life in a way that I can not seem to put in words, but I shall Love and mis her. God blessed everyone whos life was touch by such a beautiful lady. God truly smiled apon us all when he placed Ms. Doris in the paths through our own individual lifes.

My love goes out to you all and I am faithful that someday we will all meet and be with Doris once again in the arms of the Lord our God. God be with you all

I enjoyed the times we went to church and sat with Jean and Doris. Doris always had kind words to say to me and sometimes she said funny things that made us laugh. I will treasure my memory of her.

I will always cherish your memory. You have touched so many lives, especially your family. I love you and miss you always. I thank you for being such a wonderful grandmother.

I love you always.

I will miss you Grandma – but your memory will remain with me forever. I can be happy with the thought that you and Grandpa John are together again for all eternity.

I will miss you very dearly, I love you so much, I will never forget the time you put me underneath your wing while i was at Kesseler AFB, Mississppi. I love you so and you will be dearly missed

Sometimes the closest relationships are with those far away. This is how it seemed for Grandma Doris and me. I knew that it may be a while before I would see her again; So it was important to me to make it special. I guess, in a way, it was practice for the days, weeks, months and years ahead.

The thing I remember best about “Grandma Benze” is that she was always an “upbeat” and happy person. Never heard her complain! She was so much fun to be around and she really enjoyed life. I remember as a young kid being excited when she would come to visit. She was a joy to have around. I was just as excited as I got older and she would visit. She will be truly missed and was loved!!