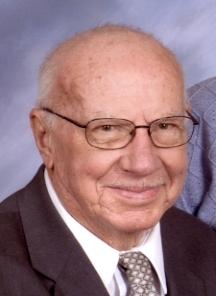 Donald Thompson was born on January 10, 1926, the son of Herbert and Inez Thompson. He was born on the homestead farm Vernon Dell and lived there most of his life.

Donald served in the 5th Infantry Division in Italy during World War II. Following the end of the European war, before his discharge, Don played baseball on a semi-pro team throughout Italy.

Following Don’s discharge from the service, he joined his brother in a partnership. For 27 years, they owned and operated a retail dairy and ice cream plant. They made thousands of popsicles for Sealtest Dairy and placed the first Ice Cream Joe trucks throughout the Tri-State area.

In 1970, the family business was sold, and the brothers started Vernon Dell Tractor Sales. It is still in operation today. They also increased the family farm to a huge purebred Herford farm, raising as many as 200-300 cattle at a time. They enjoyed traveling across the US buying and selling cattle.

The most rewarding time in Don’s life was working on the farm with his children and showing cattle at the county and state fairs. He was also an avid sports fan, following his sons’ sports career, the Steelers and the Pirates.

Following Don’s retirement, he saw the need for development in the Calcutta area; therefore he went into the real estate business. He was instrumental in bringing the first senior development to Calcutta as well as the Calcutta Health Care Facility. He also helped secure the property for Ogilvies and Martin MacLean Altmeyer Funeral Home.

Don was a member of the Calcutta UP Church for 77 years. At one time or another, he served as elder, trustee, Sunday School teacher, and choir member. One of his favorite projects was the Calcutta UP Cemetery. He served as president for 35 years seeing that it was a beautiful cemetery on the hill in Calcutta.

In addition to his parents and siblings, he was preceded in death by his grandson, Nicholas Skrinjar.

The family wishes to extend a special thanks to Netwicks Nursing Home, Foxcrest Home Health Care special aide, Maggie Mercer, and Hospice of the Valley for all they did for Don in his battle with cancer.

Services will be held at the Calcutta United Presbyterian Church on Wednesday, October 30, 2013, at 11:00 AM with Rev. Tom Clyde of Zelienople, Pa. and a former
Minister of the church officiating. Burial will follow in the Calcutta U.P. Cemetery.

Family will receive friends at the Calcutta Chapel of the Martin MacLean Altmeyer Funeral Homes on Tuesday from 2 to 4 and 6 to 8 and 1 hour prior to services at the church on Wednesday.

Dear Family, our love & prayers are with you as you celebrate Uncle Don’s life and share the memories of many precious years together. God bless & comfort each of you.

Dear Mary and Family, I was so sorry to hear about Don. He was a wonderful man and I know how much his family and friends will miss him. I was so sorry I could not get down for the funeral. Please know you have my love, prayers and sympathy. Love Cynthia Cindy Martin

Saddened to hear of Don’s passing and we send our love and prayers for God’s comfort at this time. We remember fondly our times together at Longs Run, Calcutta U.P. church, the Fair and many other good times. Keeping you all in our prayers.

We are so sorry for your loss of Don. We’ve so enjoyed our visits in Colorado and East Liverpool in these recent years and will miss them terribly. We always knew we were in for some good laughs and hometown stories. May you all focus on your best memories and hold them deep in your hearts. We’ll keep you all in our prayers.

With love and hugs,

Don, You and your family are in our thoughts and prayers. Your Dad was a very nice man and always had kind words. Cherish the memories.

I am so sorry to hear of Dons passing. For so many years he was like a surrogate father to me and he was such a help for me through early stages of my life. I always enjoyed his advice and he always treated me with the utmost respect. His opinion and perspective were things that I highly valued. I would call him from time to time for advice and he was great about sharing his thougts with me. He would always tell me “advice is worth what you pay for it and this did not cost you anything” I am blessed to have had him in my life as a friend and a mentor. May God be with the family as you go through this season of loss and rejoice that he no longer has any pain or sorrow. He has entered into eternity with his Lord and Savior Jesus Christ. I will miss him greatly as will all those whose life he touched

I did not know your father, Marcie, but I was so impressed with his obituary, and I certainly have benefited from the business that he started and from his generous community spirit. My thoughts are with you. I wish that I could be there to bring you a wonderful Texas sheet cake like you did after my Roy passed away.

I was sorry to learn about the death of Donald. May the Lord above be with you in the days ahead and may His light shine upon you.

I’m so sorry to hear of Don’s passing. My thoughts and prayers are with the family.

So saddened to hear of your Dad’s passing. Served on a couple of committees with him, through the years, and always appreciated his common sense approach to problems and his “quiet” sense of humor. Our county has lost a good citizen and a good man. Prayers going up for your mother during this difficult time.

Mary Eleanor, you were a part of the Irondale and the Banfield family. I want you and your family to know that we are thinking of you at this time.

May the love of God surround you and your family during this difficult time May you come to know that the love of God is with you always, may your memories of Donald L. Thompson, give you peace, comfort and strength…

Mr.Thompson,Jodie,and Family, So sorry to hear of your loss! May you find peace in all the fond memories you have to cherish. God be with you through your time of sorrow.

My condolences on the loss of Mr. Thompson… I have many fine and fond memories of spending winter days on a frozen pond on the back 40 ice skating, and Mr. Thompson’s booming laugh… hugs to you all…

My deepest sympathy for your loss. Uncle Don was a special person and my favorite uncle. I was very fortunate to have had the opportunity to know him and I’m so glad we had the chance to visit this last summer. He will be greatly missed.

My prayers are with you all.

The loss of a loved one is never easy. We send our condolences and prayers during this difficult time of your loss.

To the Family of Donald Thompson: We noted in the obituary that Donald served in the 5th Infantry Division in Italy during World War II. We want you to know that we appreciate his service to our country. Our most heartfelt sympathy goes out to you for your loss. Sincerely, The Daughters of the American Revolution, Wooster-Wayne Chapter

I will miss Big Don a bunch! He was one of the most influential people in my life. Some of my fondest memories growing up was being with Don. I loved being around him and listening to him. I could sit next to him for hours and be engaged in everything he said. He taught me so many things that I carry forward today.

It has been throughout my adult life where I will be doing something and a memory will pop of involving Don and the cattle. They are all great memories and ones I will always cherish.

Big Don was such a great person! He will be deeply missed.

WE WOULD LIKE TO EXPRESS OUR SINERE SYMPATHY TO MARY ELLEN AND FAMILY. DON WAS A WONDERFUL PERSON AND A GREAT AMERICAN. WE ARE PROUD TO HAVE KNOWN HIM AND SPENT TIME TOGETHER WITH DON AND MARY ELLEN. WE WILL BE SADLY MISSED. JERRY & POLLY LINGER