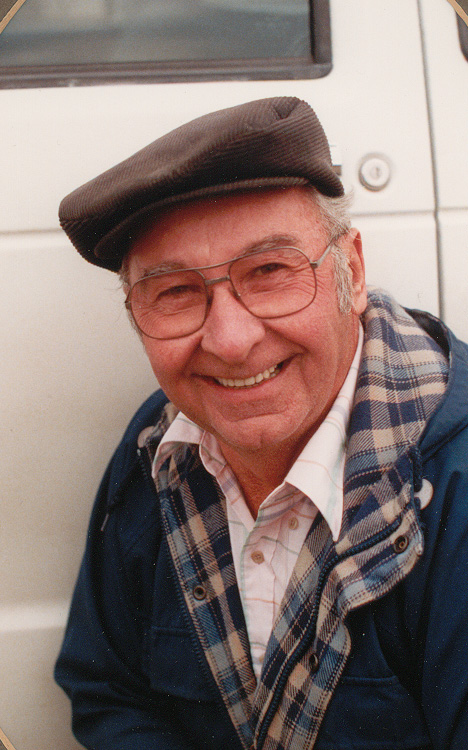 Donald E. Grimes, 85, of Uniontown, OH., closed his Bible for the last time August 1, 2012 at Cumberland Pointe Nursing Home, St. Clairsville, Ohio.
He was born April 30, 1927 at Uniontown, a son of the late Floran and Gertrude Milhorn Grimes
He was a former supervisor for East Ohio Gas and a WWII Army veteran.
Don was a member and former Elder of East Richland Friends Church and spoke at many of the local churches during his life. He was also a member Flushing American Legion Post # 366.
In addition to his parents, Don was preceded in death by his siblings; Edward, Robert and Theodore Grimes and Gertrude “Louise” Johnson.
Surviving is his wife of 63 years, Nancy J. Murphy Grimes, his son, James D. Grimes, his daughter, Patricia E. Danny Smith of Flushing, OH, his grandchildren; Jay Grimes, Michael and Shane Smith and Amy McNamara, and his great grandchildren; Kaylee, Joclyn and Derek Smith, Zac Grimes, Trevor Pritts and Brady and Kelesy McNamara and two special cousins Barney Grimes and Nancy Hendricks.
Friends will be received 2-4 and 6-8 pm Friday at the Beck-Altmeyer Funeral Home & Crematory, 204 W. Main St., St.Clairsville, OH, where Don’s funeral service will be held Saturday at 11 am with Rev. Wayne Ickes officiating.
Burial with military honors by American Legion Post 366 will follow in Rock Hill Cemetery Flushing.
Don’s family would like to thank Cumberland Pointe and their employees for their wonderful care through Don’s 12 year fight with Parkinson’s disease.
Memorial contributions may be made to East Richland Friends Church.
Offer condolences online at altmeyer.com

Don will be sadly missed by all. No matter what kind of day it was, Nancy always made him smile. Don loved his Nancy.

We were so sorry to hear of Don’s passing. Please know that our prayers are with you and your Family.

Mike and Cheryl Becker and sons

Don will be sadly missed by all who knew him. love to you Nancy.

I have only good memories of my dear Uncle Don, and they will be with me forever. I’m so sorry I cannot be with you, Aunt Nank, but please know that I’m thinking about you and yours. Love, Ron

You have my sincere sympathy for your loss.

Nancy and family: We are sorry to hear of Don’s passing. We have had Don and Boots on our prayer list at church for a long time. We know it has not been easy for you but, we also, know he is now in a better place. Our prayers are with your family.

I am sorry to hear of Don’s passing.

He was an inspiration to me. He loved Jesus and showed it in his life.

Always a cherry smile for everyone.

Sally and I were sorry to hear of Don’s passing, may our Lord give you comfort during this time.

So sorry to hear about Dons Passing. Our thoughts and prayers are with the family. Jerry and Shirley Grimes