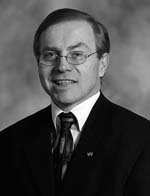 YAEGER, Dennis Paul, 59, of Wheeling, WV, died Wednesday, August 26, 2009 in Liza’s Place, surrounded by his loving family.
He was born January 13, 1950 in Wheeling, a son of the late Urban Yaeger and Mary Catherine “Marie” Grob Yaeger Schroeder.
Mr. Yaeger is the former Executive Vice President and Chief Operations Officer of Wesbanco, Inc.
He has served Wesbanco, Inc. as Vice President Bank Operations in 1987 and Executive Vice President Bank Operations in 1990.
Mr. Yaeger served Wesbanco Bank Wheeling as Vice Chairman of the Board of Directors, and previously held the position of Executive Vice President-Bank Operations from 1978-1987. From 1976-1978, he worked in the Commercial Loan Department as a Loan Officer.
In addition to his parents, he is preceded in death by his step-father, Raymond Schroeder, one brother, Thomas Joseph Schroeder, two sisters, Carol Larese and Judy McNulty.
Surviving is his wife, Nanci Harvey Yaeger, two sons, Benjamin Yaeger and his wife Jami of San Diego, CA; Cory Yaeger and his wife Melissa of Pittsburgh, PA; one brother, Robert Yaeger and his wife Linda, one sister, Joan Yaeger, a step-sister, Mary Lou Kent all of Wheeling; several nieces and nephews.
Friends received 6-8 p.m. Friday at the Altmeyer Funeral Home, 154 Kruger Street, Wheeling.
Funeral Liturgy with Mass will be celebrated at 10:00 a.m. Saturday, August 29, 2009 at St. Michael Catholic Church, Wheeling.
Memorial contributions can be made to Valley Hospice, 10686 State Route 150, Rayland, Ohio, 43943.
Offer condolences online at altmeyer.com

Although I haven’t been in touch in years, I’m sure Denny was a wonderful husband and father. I am so sorry for your loss.

We are very sad to hear of Mr. Yeager’s passing. Please accept our sincere condolences. God’s blessings to all of you.

Dear Nanci, Ben, and Cory. I send to you my deepest sympathy and prayers. Please know that my thoughts are with you. Even though I was only Denny’s Executive Assistant at WesBanco for a short time after I started in 2001, he always talked about how much he loved his family and how proud he was of his sons.

We will sorely miss our dear friend, Denny. His courage and determination in the face of such adversity were a true inspiration to all who knew and loved him. And no matter what, he never lost that great sense of humor! We are grieving with you…..with our love, Julia and Fred

We were so sorry to hear about Denny’s passing. We know he’d been ill for several years. You two made the cutest couple. We’ll be thinking about you often and keeping you in our thoughts and prayers. Keep in touch. Love, Ron and Leslie

Dear Nancy, Our thoughts and prayers are with you and the boy’s. We will alway’s remember Uncle Denny’s Big smile and great sense of humor. He will truly be missed. We love you all. God Bless

Nelson and Sharon and Jon & Justin

Death cannot separate hearts that knew true love. How fortunate you were to have shared each other’s lives. Your love for each other and family was certainly special.

I fondly remember our days at Wheeling Park High. You were the most fun.

I am so sorry for your loss. I took care Of Dennis many times over the years when he would come in for his solumedrol treatments on special procedures at Wheeling Hospital. He was a kind and friendly man. He will be greatly missed.

I met Dennis many years ago when I first started at WesBanco. He was always so kind and helpful – and a well respected man at the bank. I was very sadden to hear of his passing.

I was incredibly saddened to hear of Denny’s passing. It has been many years since I left the Ohio Valley but in those years I have thought of Denny often. Denny was my first boss out of college, he was a mentor and a friend. To this day when I run into a rough patch, I will often think about how Denny would have handled the situation. Please accept my and my family’s condolences on your loss.

I am so sorry to hear of your loss. Please know my thoughts and prayers are with you and your family. When you feel up to it, please send me your mailing address so that I can send you a personalized greeting card.

I want to send my best to your family. Denny was a great person, husband, and father. I wish you the best during these tough times.

Nanci, Cory, Ben and family – We were so shocked and saddened to hear of Denny’s passing. Our prayers are with you during this difficult time. We have such fond memories of having you all as neighbors on Echo Terrace. May God give you his comfort and peace. Love & prayers, Diane & Mike Busch

Nancy and children, I am so sorry for your loss. It saddens me to no end that you lost your husband and father.

If I was in the area I would be there. But things the way they are here it is hard for me to leave.

Again Nancy I am really sorry for your loss.

Nancy and family — I was so heartsick when Sarah told me that Denny had passed away. You are in my thoughts and prayers. Life will be very different for you now — please know you have me to lean on whenever you need to.

My deepest condolences to you. Denny was a great guy and together you were a great couple and family. I am sure you have so many wonderful memories. Denny will always be remembered by so many friends and loved ones. You are in my thoughts and prayers.

Our sincere sympathy on the passing

of Denny. Our thoughts and prayers

are with you and your family.

I am sorry to hear of Denny’s passing. He fought long and hard.

I can picture he and Dave having a chat and laughing about the fun at the Echo Terrace picnics. I am sure that Dave will be there to welcome him.

Plesase know that my prayers and love are with you.

I was so sorry to hear of Denny’s passing. To me, you were always the perfect “family unit”. Stay close as you will need each other during these trying times.

My thoughts and love are with you.

Our thoughts and prayers are with you at this very sad time.

Our thoughts are with your family today.

To His FamilY; My thoughts and prayers go out to you at this time. I worked with Denny in the Executive Department and remember him as a wonderful, soft spoken man. I know he has suffered much during the last years and know that now his suffering is over. My condolences, Donna Gacek

To the family of Mr. Yeager:

Please know that our thoughts and prayers are with you. Dennis must have been a very talented man as well as a good family man that was loved very much. We hope that good memories of your beloved husband, brother and father will be with you forever.

With Love, The Williams Family Paul is Jami’s cousin

I met Dennie many years ago when i was right out of high school and started working at the bank. Words cannot express the sorrow i felt when i heard the news. The world has lost a very nice man. My thoughts and prayers are with all of you.

To the Yaeger Family…

My sincerest sympathy…Denny was a good person and a good banker. He was a person of integrity. We had a professional relationship that spanned many years.