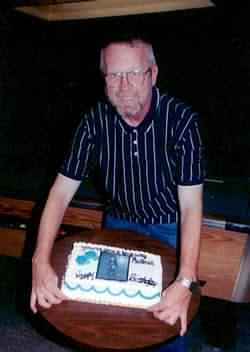 Hedger, David L., 54 of Wheeling, died Monday, March 19, 2001, in Wheeling Hospital. He was the owner of Rascals Bar and employee of Ace Garage, Wheeling; a Marine veteran from the Vietnam war and a member of the I.O.L.A. Club and the Cave Club. He was preceded in death by his father, George Williams Hedger and his mother, Betty Lee Mansell; his stepfather, Edwin T. Barry; and a friend, Donna Schank. David was the beloved brother of William ”Bill” Barry and his wife, Theresa, and Daniel ”Chubby” Barry and his wife, Ellie, of Wheeling, Joyce Rose and her husband, Ed. Judie Hedger and Susan Eberhard, all of Wheeling; beloved uncle of several nephews, nieces, great-nephews and great nieces. Friends received 2-4 and 7-9 p.m. Wednesday at the Altmeyer Funeral Home, 1400 Eoff St., Wheeling, WV Interment in Stone Church Cemetery, Wheeling.

He was a Great Brother and Friend that I will miss

It has been along time now but I still think and pray for you each and every day. Our friendship meant a lot to me. Whatever happened Dave, I truly forgive you and hope you forgive me also. You were like a brother to me. Always there. May you rest in peace and some day we will meat again.

I love you Brother.