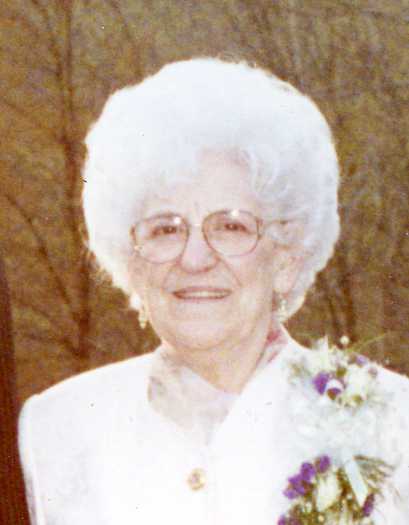 Clara R. Cooper, 83, formerly of East Liverpool, OH died Wednesday, January 2, 2008 at Country Lawn Center in Navarre, Ohio following a lengthy illness.
She was born in East Liverpool, OH on August 4, 1924, a daughter of the late Louis & Anna Dinando Catigani.
A lifelong area resident, Mrs. Cooper retired from Hall China Company in 1985, where she worked in the reclaiming department. She graduated from East Liverpool High School in 1942 and attended St. Ann Catholic Church.
She was preceded in death by her husband, Clifford J. Cooper, Sr., whom she married in 1943. She is survived by three sons, Terry L. Cooper and his wife, Jeanne of North Canton, OH, C. James Cooper and his wife, Tricia and Robert F. Cooper and his wife, Joan, both of East Liverpool, OH; a brother, Tullio Catigani of Calcutta; 10 grandchildren, Jennifer & Mike Simms of Lakeworth, FL, Melissa & Eddie Kirkland of Uniontown, OH, Juli Cooper of Deerfield, OH, Arianne & Aaron West of East Liverpool, OH, Ryan & Alicia Cooper of Fairborn, OH, Robert & Andrea Cooper of Cranberry, PA, Molly & Scott McHenry of Lima, OH, Ashley Cooper and Gary Lutton, both of East Liverpool, OH and Thomas A. Bell of Baldwin Park, CA; 13 great-grandchildren, Zachary, Samuel, Madeline, Makayle, Austin, Noah, Aubre, Christian, Ethan, Margot, Alyson, Abagail and Jake; and 2 nieces.
Besides her parents and husband, a son, William D. Cooper and a brother, Lewis Catigani, preceded her in death.
A mass of Christian burial will be held at St. Ann Catholic Church on Saturday, January 5, 2008 at 10:30 A.M. with Rev. Father George Balasko as celebrant.
Burial will follow in Riverview Cemetery.
Following the burial, family and friends will gather at the East Liverpool Chapel & Hospitality Center of the Martin MacLean Altmeyer Funeral Homes at 145 West 5th Street, East Liverpool, OH for food and fellowship.
The family will be present to receive friends at the Calcutta Chapel of the Martin MacLean Altmeyer Funeral Homes, today, Friday, January 4, 2008 from 2:00 to 8:00 PM.
Friends may view this obituary sign the guest book or send condolences on line @ altmeyer.com

We are so very sorry to hear the news about your Mom & Nanna.

Our thoughts,prayers and hearts go out to you. We love you all!

I am thinking of all of you at this very sad time and keeping you in my thoughts and prayers.

I wish I could be there to share stories of Auntie Clara.

Peace be with you~

I send my sympathy to the family of Mrs Cooper. I never met her but having the family she does means she had to be a very special lady. I know its been sad to see her go through life the past few years, but she is at peace now. Remember the good memories you all have.

I’m so sorry for loss of my Nana that I did not have the opportunity to get to know better. I will miss the thought of her very very much. I’m also very sorry for my Father’s and my Uncle’s loss. My thoughts and prayers are with you all in this time of grief.

With all my heart and soul your first grandchild.

Jeanie and Terry, All at City Scrap send our deepest sympathies, as do Bud & I. Take care. Sue Dague

Jim and Trish- I was so sorry to hear of your loss. My thoughts and prayers will be with you.