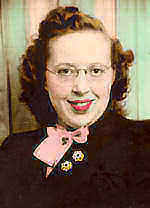 Clara was a devout Catholic and a member of ST. Joseph’s Cathedral Parish. She was retired after many
years of service at Mount de Chantal Visitation Academy, where she first worked as an infirmary attendant
and later as a housekeeper.

Family and friends will be received from 2-4 and 6-8pm., Monday, December 26 at Altmeyer Funeral
Home, 1400 Eoff Street, Wheeling, where a vigil service will be held at 3:30 pm followed
immediately by a rosary service at 3:45 pm.

I am so sorry to hear of your sister’s sudden passing. My thoughts and prayers are with you and your family. Nancy

So sorry for the loss of your sister.Our thoughts and prayers are with you !

To the family of Clara:

in Washington DC send heartfelt condolences to all of you. Clara was very much a part of the larger Mount “community” and we have lovely memories of her. May she rest in

peace with those of your family members who predeceased her.