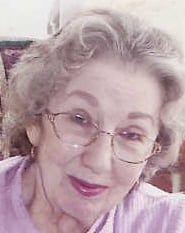 She was born in Atlantic City, NJ, and was a Virginia Beach resident for over 30 years. She was a Roman Catholic. She retired from Civil Service at the Norfolk Naval Station Dental Clinic.

She is survived by her husband of 42 years John W. Turk; three sons, John J. Turk and his wife Charlotte of Virginia Beach, Michael William Turk of Anchorage, AK, and James B. Turk of Virginia Beach; a sister Gerry Mallon of Warminster, PA; as well as two grandchildren, Christopher J. Turk and Tiffany H. Turk.

A memorial mass will be conducted in St. Gregory the Great Catholic Church in Virginia Beach on Saturday March 20, 2004 at 10:00am.

Altmeyer Funeral Home in Virginia Beach is in charge of arrangements.

hi my name is brittany i dont know you or anybody in your family but i want to say that i am sorry to your family for you loss, it is very hard to lose somebody especially someone you are attached to and you love i lost my grandmother on june 8 2001 in virginia beach. i am 12 years old me and my little cousin ryen who is 9 now were very close with her we miss her very much and we will always love her