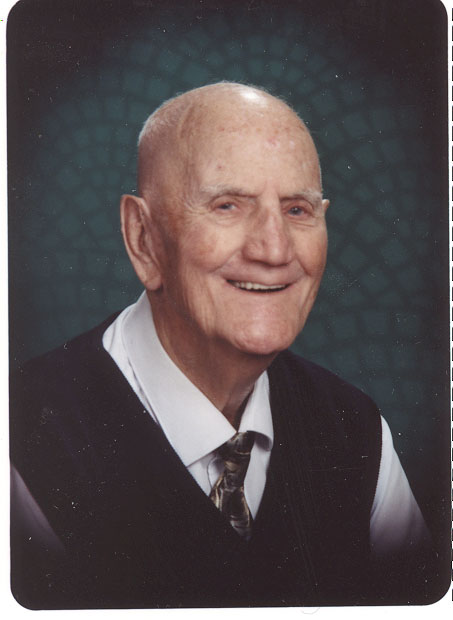 Mr. Davis born November 26, 1913 in Shadyside, Ohio. He was the oldest living retiree of Louis Marx Toy Plant, where he was a tool and die maker. He attended the First Church of God, McMechen and was known to all as “The Tool Man” at the Glen Dale Flea Market, of which he was affiliated for over 35 years.

Friends will be received from Noon until 8 pm on Sunday, and from 8 am until time of funeral services at 1 pm on Monday, January 14, 2008 at Altmeyer Funeral Home, Benwood-McMechen Chapel, 214 Marshall Street, McMechen.

Following the interment in McMechen Cemetery, a luncheon will be held at the McMechen Volunteer Fire Department.

Another giant has gone to rest. We will always have fond memories of “Pap”, i.e., tasting the first beer at camp, famous apple pie, and his love for everyone. He will be sadly missed. Love to all of you who held him in high esteem.

dDear Virginia and Jim. Evelyn and I share our condolences for your dad. I have fond memorys of the summers when we would build dams in Jim’s run down in front of your home. Your dad was very kind.

I am sad as I think how much you will miss your dad, grandfather, etc, and yet, I rejoice as I reflect that your separation is but a temporary gap in this short life on earth. I thank the Lord for the many years Charles had here to enrich and bless your lives.

Love and prayer In Him,

I am the redhead at Young’s Cafeteria and looked forward to seeing “Pap” and his family members every Monday. What an absolutely wonderful and kind man he was and it would show with all family he would bring with him. We will miss him very much. I’m sorry I was out of town when the showing was held. Please accept my condolences and I will keep you in my thoughts and prayers. God surely blessed your family with his long life. May God be with you.

I would like to thank you in advance for any contrbiutions made to Mountaineer Boys State. Thank you Jim for always being there for me. I will see you today old bubby. Clarence

Jim and Carol, we are sorry to hear about the passing of your Dad. Please know that our thoughts and prayers are with you.

Jim, may God provide comfort to you and your family at this time. Randall

Joe and I are so sorry to hear of your loss. Uncle Chuck ceratinly lived a full fun life. He always had great stories and sure loved all the kids of all ages. He will really be missed.

On behalf of all your American Legion friends, please know that our thoughts and prayers are with you and your family.

We send our sincere sympathy to your family on your loss of such a wonderful man. It was our honor and privilege to get to know Grandpa Davis over these last years. I will always remember Chris & Melissa talking about the pies he would make for the family. The last time we saw him was at Matthew’s 2nd Birthday party. He and my mother, Frances, were sitting together having a great time eating and talking. That is a memory I will always have. He had a wonderful life full of great family memories and a family that dearly loved him.

We will miss ” PAP DAVIS ” . A kinder, gentler man will not be found.