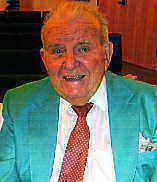 Charles Edwin Johnson, Sr. passed away Saturday, December 17, 2011. He was born April 9, 1923, in his grandmother’s home in Newport News. He was an only child. He lived most of his life in Newport News and Hampton, He graduated from Newport News High School in 1947, after enlisting in the US Navy.

He was a born-again Christian, who served the Lord at Liberty Baptist Church in Hampton, where he taught Sunday school for 18 years and was head usher for six years. He was a musician all his life and leader of the Charlie Johnson Combo.

Charles was a Blue Lodge Master Mason and a member of Colonial Chapter #40 OES and was past president of the National Association of Retired Federal Employees. He graduated from NASA Apprentice School in 1955 and served as a supervisor, then section head for Materials Processing which contributed to the Lunar and Viking projects. He retired after 39-1/2 years.

He was a Boy Scout leader for ten years and was co-owner of Pembroke Marine in Hampton with his son, Bill.

Stewart and I want to express our sincere sympathy to Ann and the family. Stewart enjoyed playing music with Charlie over the years and thought so highly of him. He will certainly be missed.

To the family of Charles Johnson,

I am sorry for your loss. May you find comfort in knowing that God is “near to those that are broken at heart; and those who are crushed in spirit he saves.” Psalm 34;18 With sympathy,