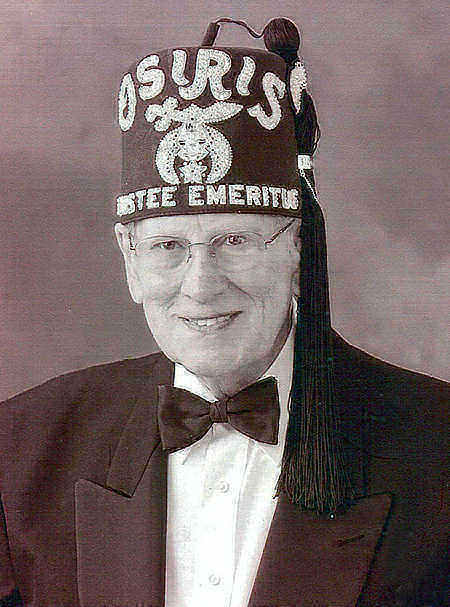 YAGER, Charles E. “Chuck” 85, of Benwood, WV, died Saturday, December 28, 2013 in Liza’s Place.
He was born January 14, 1928 in Wheeling, WV, a son of the late Charles E. and Claire Reynolds Yager.
He was a former employee of Allied Chemical, a member of the McMechen First Church of God, Deacon Emeritus, Ohio Lodge #1, Past Monarch of El Tor Grotto, Wheeling, Past President of Directors Staff, Trustee Emeritus, Past Captain of the Arab Patrol and Chaplin, member of the Legion of Honor and Belmont Shrine Club, Lt. Colonel and Chaplin of the Provost Guard, member of the Indian Patrol and Chaplin, Charter member of the Child Transport and Osiris Hillbilly Clan #54, American Legion, Post #5, McMechen, Past President of the Benwood Lions Club and a Navy veteran of WWII.
In addition to his parents, he was preceded in death by his first wife, Leola “Lee” P. Hupp Yager, two sons, Jimmy and Craig Yager, a daughter, Marcie Yager, his wife, Nancy C. Lowe Burkhart Yager in 2012.
Chuck was a licensed airplane pilot, enjoyed the thrill of flying and loved aviation and a clear ski.
Surviving are his children, Gary Yager of Wheeling and loving daughter-in-law, Marsha Yager of Gilmer, TX; Vicki Dave Allender of Moundsville, WV; Pam Jim Deel of Moundsville; Joseph E. Rayne Ann of Morgantown, WV; grandchildren, Craig Karrie Yager and Alicia Brian Zoya, David Krenna Allender, Morgan Megan Allender, Kimberly Adam Pratt, Kaley Jonathan Mironav, Matthew Lauren Huggins Deel, Ashley Deel; great-grandchildren, Raegan Yager and Nicholas Yager, Kinley Pratt, Sylas Burkhart, Koie Mironav, Ella Allender; several nieces and nephews; two special friends, Fran Riggle and flying buddy, Ed Evans.
Friends will be received Tuesday, December 31, 2013 from 11:00 a.m. until the time of the funeral services at 1:00 p.m. at the First Church of God, Tenth and Logan Street, McMechen, with Pastor Mitch Johnston officiating.
Interment in Mt. Olivet Cemetery.
Arrangements entrusted to the Altmeyer Funeral Home, 214 Marshall Street, McMechen.
Memorial contributions can be made to the McMechen First Church of God or Liza’s Place.
The family would like to thank the staff at Liza’s Place for all their tender loving care.
Online condolences may be offered to the family at altmeyer.com

Chuck was an amazing man, so loving and kind to so many people! Of all the memories I will treasure most was the trip we made to Paden City so that Chuck could visit with his cousins, Bill and Mary, whom he had not seen since they were all children. That was very meaningful to him. We did many things together since that time, and I always saw how helpful and nice he was to everyone. I will treasure, as well, our last telephone conversation in mid-December. We ended it by saying to each other “I love you” and “I love you, too.”

Dad was a wonderful father and friend. A Godly man that walked tall and with dignity and integrity.. Was a kind man, and he fought the good fight. God Speed..

I worked with your dad for many years at Allied Chemical Plant, and I wanted to tell you that he was one of the greatest guys ever to work with. He was a wonderful man, and I really admired him. We are so sorry for your loss.

My mom and I want to say we are sorry to hear about the loss of your father.

Sorry for your loss. My husband Bob and I live in Tom Yoho’s old house and many times I remember your family, I speak of how you, Jim, Rocky and Marci and all of us Anderson kids played.

I lost my mom 2 years ago and my dad in 1985. Keep all the memories and stay strong. Your parents were Good people and I remember then both well.

gary, so sorry for the loss of your father. May he rest in peace.

Gary, so sorry to hear about your Dad, he was a very kind man, with sympathy. Beth & Jim

I am sorry to hear about your dad. Everyone is in my prayers.

May your memories of Charles Edward Yager, give you peace, comfort and strength…

Oh! I have slipped the surly bonds of earth,

And danced the skies on laughter-silvered wings;

Of sun-split clouds, –and done a hundred things

You have not dreamed of –Wheeled and soared and swung

High in the sunlit silence. Hov’ring there

I’ve chased the shouting wind along, and flung

My eager craft through footless halls of air…

Up, up the long, delirious, burning blue

Where never lark or even eagle flew —

And, while with silent lifting mind I’ve trod

The high untrespassed sanctity of space,

Put out my hand, and touched the face of God. Amen!

So difficult to lose a parent. May you be comforted with many good memories of times shared. I’ll keep you in my prayers, Gary.

We miss you so sad remember riding to church and eat lunch easter lenton church and christmas parade Moundsville wva long time rip we miss you and church danny fox and Gene howard and me Rip We miss you much we love you chuck yager!