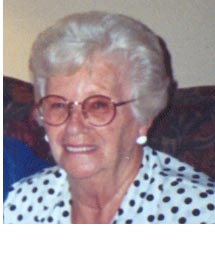 We were sorry to hear of your mother’s passing. Having just lost my father-in-law, we know how you are feeling right now. Your dear mother is in a far better place and she is not suffering any longer. This is God’s promise — let that help get you through these hard days. God bless you and your family. Be assured of our prayers.

Julie and Ruth Anderson would like to send the condolences to the family of Bette and to Marcie Cook good friend of Bette’s – Bette was a special lady Ruth and I bowled with Bette and Marcie and they were to delightful people to be around and they could sure stay up late while us young folk needed to be in bed early Ha Ha – She has been thought of and spoke of often by us and we will be thinking of the family and Marcie and our prayers will be with you.

My family and I live on Water Street also. We all knew Bette and thought a lot of her. I worked with her at Cooks when I was in high school. She was a very kind and thoughtful person. We all will miss her.

The Paul & Lynn Cook family, Matt, Allison and Hilary would like to express our condolences to the family of Bette Branicky. Our thoughts and prayers are with you. Bette was such a great friend of my mother’s. She will be dearly missed.