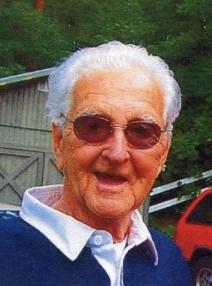 Carl Edward Nelson, 95 of Irondale, Ohio died at his residence on Sunday, May 19, 2013 following a lengthy illness. He was born in Wellsville, OH on March 14, 1918 and was a son of the late Bernie and Ethel M. Parsons Nelson.

Living his entire life in this area, he worked for 49 years as a brakeman and conductor for Conrail before his retirement in 1983. Mr. Nelson attended Irondale United Methodist Church and was a veteran of the US Army serving during World War II. He was a member of the Aten Avenue Gang, enjoyed hunting, fishing gardening and loved to cut grass.

Besides his parents, he is preceded in death by three brothers: Raymond Nelson, Leroy Nelson and Bernie J. Nelson as well as four sisters: Twila Miles, Wilma Budnyk, June Lavelle and Helen Tice.

Services will be held at the Wellsville Chapel of the Martin MacLean Altmeyer Funeral Homes on Thursday, May 23, 2013 at 11:00 AM with Pastor Dan Crow of the church officiating.

Burial will follow in Hammondsville Cemetery where the Tri State Burial Group will accord military honors.

Following the Committal Service, family and friends will gather for food and fellowship at the Saline Township Complex.

The family will be present to receive friends at the funeral home in Wellsville on Wednesday, May 22, 2013 from 3-5 and 6-8PM

Dear Aunt Dolly, Tina, Myra and famlies. My thoughts are with you all at this sad time. Your dad is reunited with my dad and all the other Nelsons, I bet they are having fun up there. Your dad was a wonderful man and will be missed so much by everyone. I wished I had seen him more but the times I did I will treasure. My love to you all.

Dear Dolly, Myra and Tina: Carl was the hardest working man i’ve ever known! I have lots of wonderful memories being neighbors with the Carl Nelson family. I am thinking of you all ! Sincerely…..Jimmy Nicholson Cuyahoga Falls, OH

Dolly & the rest of the family,

I am very sorry for your loss..Mr. Nelson was a Good Man..A lot of GREAT memories growing up around him..Please know ya’ll have my Heartfelt Thoughts & Prayers..God Bless to each & every family member..

I love and miss you so much Pappy!

May the love of God surround you and your family during this difficult time. May you come to know that the love of God is always with you. Your memories of Carl will give you peace, comfort and strength…

Mr. Nelson and our Dad were friends for almost ninety years, and our lives were filled with stories of the adventures of he and “Carie” in 1920’s and 1930’s Wellsville. Mr. & Mrs. Nelson attended our parents’ 50th and 60th wedding anniversary celebrations, and, a few years ago, Dad’s funeral. May Dad and Mr. Nelson now be reunited, and may God bless Mr. Nelson’s wonderful family.

Prayers for the loved ones

prayers to the love ones

So sorry and sad to hear this news…I have many fond memories of your family. Wishing you comfort and strength in this difficult time. Love to all of you.

Thoughts and prayers to you all! Carl was a wonderful man!Wishing you comfort and strength in this difficult time. Love to all of you.

We are all so sad for your loss of your wonderful Carl. Prayers for your family and loved ones.