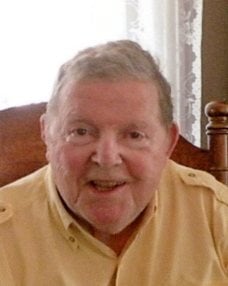 Carl D. “Dude” Bell, 87 formerly of Irish Ridge Road, East Liverpool, died on Friday, December 2, 2011 at the Calcutta Health Care following a brief illness. He was born in Wellsville, Ohio on November 19, 1924 and was a son of the late Okey Ross and Jemimah Millicent Canary Bell.

Living his entire life in this area, he worked as a foreman in the Agriculture Department at the former Crucible Steel. He was a member of the 1st Assembly of God Church in Calcutta; a member of the Masonic Lodge 180 in Wellsville, Scottish Rite of Steubenville and the Shriners. He was a veteran of the US Navy serving with the Seabees during World War II.

His first wife: LaVada Scott Bell preceded him in death.

Also preceding him in death were four brother and two sisters.

His second wife: Joyce L. Betteridge Bell, whom he married on November 19, 1983 survives him at home.

Services will be held at the Calcutta Chapel of the Martin MacLean Altmeyer Funeral Homes on Monday, December 5, 2011 at 11:00 AM with Pastor Steve Huskey of Destiny House Assembly of God officiating. The Tri State Burial Group and the West Virginia National Guard Honor Detail will accord Military Honors.

The family will be present to receive friends at the funeral home in Calcutta on Sunday, December 4, 2011 from 2-4 and 6-8PM. Masonic Services will be held at 7:30PM.

All our love and prayers to your family Dude!I know you are resting in peace with our heavenly Father.You will be loved and missed greatly.Love you all Margie & Kevin

Dear Joyce and family. Our sympathies to you and your family. God is good, all the time and He will be with you in the coming days. Helen and Bob

I was so sorry today just now at 11:40 to be reading of Dude’s going to be with Jesus. I just want to express my prayers and love for you and appreciate you so much. I remember meeting Dude and sitting with you at our reunion . . .and 3 weeks from that time Dave went to be with the Lord. Just know that God is in charge and will see you thru minute by minue. God bless you. Love and prayers, Harriet Sanford

Mother ,Dianne and I send our deepest sympathy and love to you and your family at this difficult time.

I am so sorry for your loss. My prayers are with your entire family during this difficult time.

So sorry to hear about your loss. You and your families are in my prayers.

Know that I am praying for you in your time of loss. We know where Dude is and one day we will be rejoicing with him at Our Lord’s Throne. May His grace and peace be upon you and uphold you and remember you are never alone! God Bless Janet Lee Stanley

Joyce, it is hard to find the correct words. Please know that you are in my heart and in my prayers. Much love, Katie

Many prayers for the family in this difficult time. So sorry for your loss.

My prayers and thoughts are with you all. Love,Charlotte Dana’s Mom

My sincere condolences for your loss. Your fond memories of him will strengthen your family through this period of mourning.

My sincere condolences for your lost. Your fond memories of him will strengthen your family through this period of mourning.

WE ARE SORRY TO HEAR ABOUT DUDE.MAY GOD BLESS YOU AND KEEP YOU IN HIS LOVEING HANDS