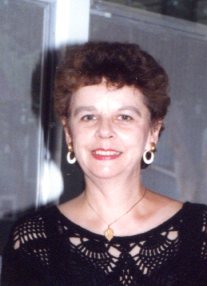 Bonnie R. Martin passed away peacefully Friday afternoon in her residence at Pepperberry Suites at Foxcrest. She was born in Elyria, OH, the daughter of Pearl Twerrel Grunda and Monroe Reynolds. Bonnie graduated from Muskingum College, which is where she met her beloved husband, Richard C. Martin. They married on July 3, 1950. They shared 41 happy years together, until Dick’s passing in 1991. Bonnie was preceded in death by her much loved mother, Pearl and her beloved step-father, Joseph Grunda. Also preceding her in death just this past year was her only child, Richard D. Martin, and his wife, Cindy Demetre Martin, both of Kansas City, MO.

Bonnie taught for one year in East Liverpool city schools, and later attained her Masters Degree at Youngstown State, and returned to work as a Guidance Counselor at East Liverpool High School for a decade.

Bonnie is survived by two beloved grandsons, Richard E. Martin and Brian J. Martin, both of Kansas City, MO, as well as several brothers in law and many nieces and nephews.

Services will be held on Saturday, November 26th at 11AM at the Calcutta Chapel of the Martin MacLean Altmeyer Funeral Homes, with Rev. Dale Sutton officiating. Calling is to be one hour before the service. Interment will be at Riverview Cemetery. Memorials can be sent to First United Methodist Church, East Liverpool, OH or Dollars for Scholars.

Family & friends may view this obituary, sign the guestbook or send condolences online at altmeyer.com

Carolee and Family – We have lost another good one! I am feeling very sad that Bonnie is now gone, but may she rest in peace with Dick and Richard. Fondly, Jill

Many, many memories. Always loved the bbq ham sandwiches, watching college football in your den and always feeling at home in your home. I love you Aunt Bonnie!

We send our love and deepest sympathy to all that loved Bonnie as we all did.