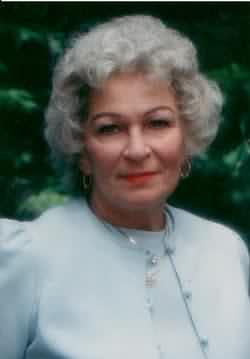 Barbara Jane Pennington Boyce passed away peacefully at Bishop Hodge’s Continuous Care Center in Wheeling, West Virginia, on Saturday October 27, 2001. She was born in Washington, Pa, on Marsh 20, 1927. She is the daughter of Mr. and Mrs. William D. Pennington. Barbara will be sorely missed by her only child and best friend, Shannon Ott Boyce Kear, and her husband, Captain W. James Kear, of Coronado, California. She was a nurturing grandmother to her two grandchildren who loved her dearly, Whitney Boyce Kear, 17, and Chandler Boyce Kear, 11.

A life-long resident of Cloverfields, Wheeling, Barbara was married to Samuel Ott Boyce for twenty-eight years. Samuel Boyce retired from Wheeling Machine Products Company as Secretary-Treasurer in 1980 and passed away on July 5, 1981. She attended Vance Memorial Presbyterian Church in Wheeling.

Barbara excelled as a loving and committed wife and mother. She adored her grandchildren and was extremely active in their young lives in many nurturing and loving ways. Together, Whitney and Chandler brought her great joy and happiness. She was an active member and volunteer in the local P.T.A., Past President of King’s Daughters, O.V.M.C. Poinsettia Twig Circle, friends of Wheeling, Oglebay Institute and Garden Club, Wheeling Symphony and American Red Cross. In 1985, Barbara was the benefactor of the Boyce Tennis Shelter, Wheeling Park, in memory of her husband , Samuel, in conjunction with private donations to the Oglebay Tennis Club. For years, Barbara greatly enjoyed antique collecting and operated a small antique business. Illustrative of her passion for life and giving, she became a qualified paramedic and provided volunteer service to Mets Ambulance Company in the late 1970’s.

Barbara was an avid sportswoman and was an active member of Oglebay Tennis Club. She also enjoyed frequent ski trips to New England, California, and Aspen with friends and family. She greatly enjoyed golfing, bowling, water skiing and white water rafting. Barbara also loved music and was a naturtal at piano, organ, guitar, ukulele and accordion. She was a wonderful role model as a wife, a mother, and as a grandmother in health and during protracted illness. Displaying inspirational optimism and spirit, she often commented that she ”hath done what she could.” Barbara Jane Pennington Boyce did an awful lot, and she will be lovingly remembered by her many friends and family as she resides in a much more restful place.

Visitation will be held at Altmeyer Funeral Home, 1400 Eoff Street, Wheeling, from 4-7 pm on Tuesday October 30, 2001. Funeral Services will be held at Altmeyer’s at 11 am on Wednesday October 31, 2001, followed by graveside services at Greenwood Cemetery, Wheeling. Those wishing to make memorial contributions in lieu of flowers may do so to Oglebay Park, which provided years of enjoyment to Barbara, Sam, Shannon, her grandchildren and generations yet to come.

I’m so sorry to learn of your Mother’s passing. I know that this will be a very, very difficult time for you. However, if she wasn’t so dear to you, you wouldn’t hurt so much. So much love and memories. Sorry this is so impersonal. I don’t have your current address… Love and peace, Deb