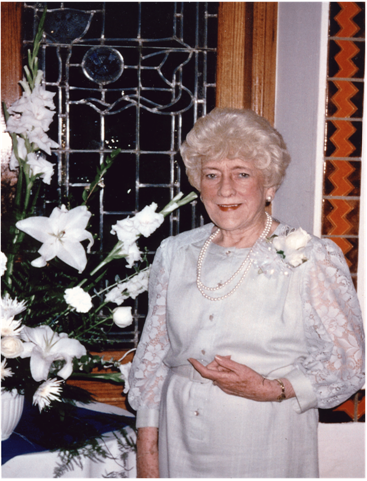 Audrey M. Williams, 91, entered heavens doors on Thursday, November 17, 2011. She is preceded in death by her husband Edison N. Williams. She was a member of Eastern Star of Norview. Left to cherish her memory are her sons; Larry W. McClellan Beverly of Clemmons, NC, Shelton F. Williams of Virginia Beach, her daughter; Mary J. Peterson of Richmond, a special daughter; Martha Gimenez, six grandchildren; Karen Swan of Winston Salem, Corky McClellan Chela and Andrea Marrs of Clemmons, NC, David Marrs Donna of Richmond, VA, Christin Henderson Markell Louisa, VA, Aric Willaims of Virginia Beach, VA, Gayle Olah of Massanutan, VA and seven great grandchildren; J.T. Swan, William Silviana, Olivia McClellan McKye Marrs all of Winston Salem, NC, Meena Marrs of Richmond, VA, Mason Henderson of Louisa, VA and Sarah Pleasants of Virginia Beach, VA and numerous nieces and nephews.
The family will have a Celebration of Life in the Altmeyer Funeral Home on Tuesday November 22, 2011 at 1:00 pm and burial will conclude the services in the Woodlawn Memorial Park at 2:30 pm Tuesday.
Condolences may be expressed to the family at altmeyer.com

Mama: Thank you for sharing what it is like to be in heaven. We all love you dearly.

Mary, I am thinking of you and your family at this time. I have so many memories of your mom, since I lived part time at your house growing up. I take Vitamin E everyday since she told me it was the secret to staying young.

Mary, sorry I did not get to see your mom before her passing. Please know that I thought of her a lot.

May you find comfort in the memories that are yours to cherish always, and strength in the companionship of those who share your loss…. Mom and I have learned never to underestimate the healing power we all have. It is always there to be used for the highest good. Blessed are those who mourn, for they shall be comforted. Matthew 5:4 May it be a source of inner strength to know that our loving GOD is watching over you, and that, throughout this time of need, HE will stay close by your side.

Know that Mom and I are here for you. Our prayers for strength and comfort are with you and your family.

Shelton, may God give you strength and may his angels surround and comfort you and your family during this time ~

Shelton, my thoughts and prayers are with you and your family.

Shelton, my thoughts and prayers are with you and your family. Keep your fond memories of your times with your mother and she will be with you and bring a smile to your face for a long time to come.