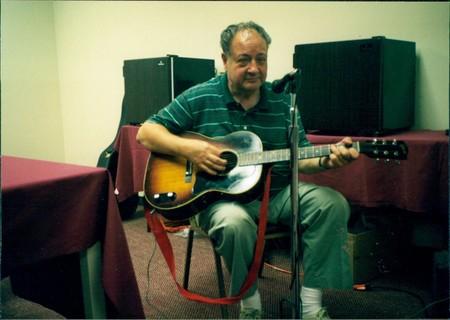 Anthony Vito Fazio, born 11/6/1925, passed peacefully into the arms of our Lord November 5th, 2013.
Beloved Husband, Father, Brother, Son and Uncle, Tony was a light in the lives of his family and everyone who knew him. Always smiling, always somthing positive to say, describe his always happy demeanor. At a young age Tony picked up a guitar and taught himself chords. He had a natural ear for music and a beautiful tone in his voice.
Tony grew up in Brooklyn, NY with his parents Francesco and Francis Fazio and his brother Angelo. He served in the US Navy during WWII and upon his return to the US became a tailor in the garment district in NY City. He married his great love, Millie, in June 1952. They had 3 children, Frank, Charles and Cynthia. Tony attended technical schools and worked his way into managment where he ultimately became Head of Quality Control for the London Fog Corporation where he retired after more than 30 years of service.
Tony and Millie were adventurous and over the years moved their family to several towns in the MD, VA, PA areas. Their strong Catholic faith helped connect them to each community. They made many friends along the way and finally settled in Virginia Beach. Tony enjoyed retirement and loved to fish, play guitar for his friends and family, go camping at Indian Cove Resort and spend time with his grandchildren. He poured his love into Danielle, Cole and Chelsea and left them with a lifetime of wonderful memories. Four years ago God blessed him with twin great granddaughters, Hailey and Juliet. He was able to get to know them as they visited him and Millie frequently at their home and at every holiday. Most recently he had the blessing of meeting his great great son Cayden Anthony, who will forever bear his name.
Tony will be remembered as a loving and generous man who loved our Lord and Savior and his family. His selflessness, honesty and humility are the pinnacles of his legacy. He put a song in everyone’s heart with his singing and guitar-playing and will be greatly missed.

So sorry to hear of your dads’ passing. He was a very kind to my mom at London Fog and I also remember him to be very kind and gentle. I know he will be greatly missed. My sincere condolences.

Please accept our sincere condolences and know that you and your family are very much in our thoughts and prayers. I am so glad that I had the opportunity to meet him and visit him. He was such a sweet and gentle man. He will be missed.

So sorry to hear of your dad’s passing.You and your family are in my thoughts and prayers.

To the Fazio Family….my deepest sympathy in the passing of my friend

“Tony”. I worked with him at Our Lady of Perpetual Help many times. I was with the “Activity Dept.” & enjoyed having Tony in our group activities. He would tell us about his military career & job. May he rest in peace. Mary Ann Bromley