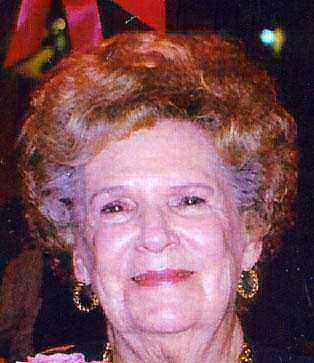 TWEEDLIE, Anna I., 82, of McMechen, W.Va., died Sunday, July 2, 2006 in Allegheny General Hospital, Pittsburgh, Pa., after a short and courageous battle with non-hodgkins lymphoma.
She was born in McMechen on January 6, 1923, the daughter of the late Jacob and Ethel Ray McCracken Slonaker. She was a member of St. James Catholic Church, McMechen and was a homemaker. She was retired from Ohio Valley Medical Center.
In addition to her parents, she was preceded in death by her husband, Thomas Joseph Tweedlie; a daughter, Cathy Tweedlie-Blair; sisters, Lucille Whipkey, Rosalie Swim, Grace Santa Aletha Keffer; and two brothers, Pete and Atley Slonaker.
She is survived by daughters, Mary V. Ken Chambon of Bridgeville, Pa, Debra E. Marc Abraham, Tanis S. Glen Travis, all of Glen Dale; a son, Thomas F. Sandy of Glen Dale; grandchildren, Joe Knox Blair, of Florida, Jason Keith Blair, of Parkersburg, W.Va., Elizabeth Ann Salkovick, of Moundsville, Melanie Lynn Tweedlie, of Wheeling, Kenneth Thomas Chambon and Kerry Ann Chambon, of Bridgeville, Pa, Marc Abraham and Michael Abraham, of Glen Dale; eight great-grandchildren; two sisters, June Schneider, of Wheeling and Imogene Criswell of Columbus, Ohio; and a brother, Bud Slonaker of California.
Friends will be received from 2-4 and 6-8 pm Wednesday at Altmeyer Funeral Home, Benwood-McMechen Chapel, 214 Marshall Street, McMechen, where a vigil service will be held at 2pmWednesday.
Mass of Christian Burial will be celebrated at 11 am Thursday, July 6, 2006 at St. James Catholic Church, McMechen, with the Rev. Joseph Hayden, S.J. as celebrant. Interment will follow at McMechen Cemetery.
Memorial contributions may be made to a library of the donors choice or the American Cancer Society.

Dear Sandy and Tom and the entire Tweedlie Family – My condolences in the loss of your Mother. Just watching the Video Tribute shows how close the family was and the love that you all shared. Anna sure showed true beuaty inside and out. May those memories be cherished and may they bring you peace knowing she is not suffering. God Bless all of you. Sandy in case you forgot me – we worked together at Specialty Auto years ago. It has been a long time.

My email address is listed so please feel free to drop me a line or if there is anything I can do let me know.

So sorry to hear about your mom. You and your family are in our prayers.

I am thinking about you Mrs. Abraham. Debbie

Kathy Blair was a friend of mine. She had many wonderful memories of her family. Please accept my deepest sympathy.

I am so sorry about your mother. I have good memories of her when we were teenagers. She was a very kind person.

Sorry for your loss. I went to grade school with Debbie, Cathy, and Tom……Ed