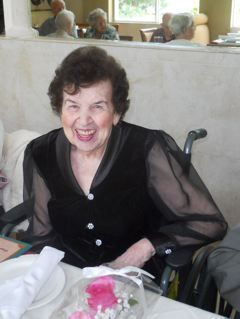 Ann Collins Johnson, born November 17, 1924, Died August 15th, 2013.; daughter of John L. Collins and Francis Kerney Collins. She was 88 years old.
Ann Johnson lived most of her life on the Virginia peninsula and graduated from Newport News High School in 1942. From 1952-2003, she was a resident of Hampton, VA. From 2003-present she lived in Venice, FL.
She was a born-again Christian who served the Lord, and was an active member of Liberty Baptist Church where she taught Sunday School for 35 years, sang in the adult choir for 43 years, sang in a ladies ensemble and was guest soloist for various functions.
Preceded in death by her devoted husband of 70 years, Charles Edwin Johnson, Sr., and son, Charles Edwin Chuck Johnson, Jr. May 24, 2001and sister, Betty Collins Mischler of Nebraska.
Ann leaves another son, William R. Bill Johnson Frances of Gloucester, VA, and a daughter, Belinda Johnson Aubuchon Bill of Nokomis, FL. Chuck left a wife, Angela and two children, Amy Wise Brandon and Hope Johnson, of Niceville, FL. Other grandchildren are: Colette Black Tony, Mack Kitchel Jessica Bryce Johnson Brooke and Chad Johnson. She also had 5 great-grand children.
Ann leaves a brother, John L. Collins, Jr., of Virginia Beach, VA and an aunt, Josephine Vaughn of Newport News, VA. There are several nieces and nephews.
She was a Past Matron of Colonial Chapter #40, OES, and secretary for 9 years. Last week, she received her 60 year membership pin. She had dual membership at Sarasota Baptist Church and Liberty Baptist. Ann was active in PTA and was instrumental in helping organize several local PTA’s. She was a education student at Thomas Nelson Community College for two years and an active member of the National Association of Retired Federal Employees NARFE. She retired after 20 years at NASA, Langley Research Center. She raised and showed Pomeranians and was Show Chairman for the Langley Kennel Club for several years. In more recent years, she enjoyed a miniature poodle named “Scooter”. She loved to embroidery, knit, sew and made many beautiful things.
Ann said, “Life with Charlie has been exciting and with our three children, things were never dull.” Charlie served in the Navy, and early in their married life they helped his mother in the family boarding house preparing as many as 50 lunch meals a day. During their 60th wedding celebration, Charlie said, “Ann, before all these witnesses, I want to affirm my love for you today, now more than ever!” Their life revolved around their farm like home on Big Bethel Road with all of their animals. They had Bessie the cow, Elvis the bull, Tony the pony, Buttercup the calf, 22 Pomeranians, 8 Persian cats, and a skunk named Sam. They enjoyed the “snowbird” life with a winter residence in Venice, FL. until they moved full time next door to their daughter. Her last four & 1/2 years were spent at Harbor Chase Assisted Living. Ann will be interred beside her loving husband, Charles, on Thursday, August 22, 2013 in Peninsula Memorial Park in Newport News.
In lieu of flowers, please send donations to those who assisted her at Harbor Chase ALF, 950 Pinebrook Road, Venice, FL 34285.