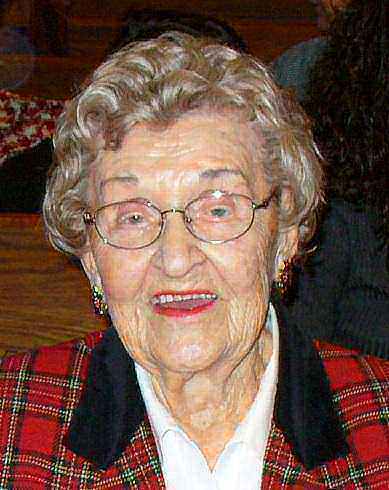 Born in Teutopolis, IL, Alice then moved to Rockford, IL where she studied and received a Teacher’s Certificate for Piano at Bodford’s School of Music. She also studied voice. As a lyric soprano, she performed on radio and local stage productions. She was class president in Muldoon High School for Girls. Then she attended business college to learn secretarial skills.

In 1943 she joined the Navy as a WAVE, working for the head of Navy Relief in Bainbridge, MD. Alice continued her musical career in the Navy. When singing “Mozart’s Alleluia” to 10, 000 Navy personnel, she was called “the Nightingale of Bainbridge”. That is where Chief Edward Hauss met and married her!

After their stint in the Navy, they moved to Pearl River, NY and raised nine children. Alice continued with her music, directing church choirs as well as solo work. Alice sang “Amahl & the Night Visitors” with son Robert when she was asked to be Mother Abbess in the Broadway version of “Sound of Music”, but was unwilling to leave her family.

In 1961 the family moved to Florida where Alice lived for 42 years. Her husband died in 1989 and she moved to Virginia Beach in 2003 to live with her daughter and son-in-law, Liz and Troy.

Due to a couple falls injuring her extremities, Alice was moved to SNC Windermere, was voted “president of the residents” and initiated a weekly bible study after years of being Eucharistic Minister in FL. Alice’s family credits her long and happy final years to the compassionate and competent care provided by her loving daughter Liz Halstead and the staff of Windermere. Special thanks to SVBGH ICU unit for their care!

The family will receive friends at Altmeyer Funeral Home, 1801 Baltic Ave., on Thursday from 6:00 until 8:00pm. A Mass of the Resurrection will be held on Friday at 11:00am at Star of the Sea Catholic Church. Internment will take place in FL. In lieu of flowers, send donations to a charity of your choice. Condolences may be expressed to the family at altmeyer.com.

Aunt Alice, my Father’s only sibling, was my special Godmother throughout my whole life, from birth to Baptism and all of the other Sacraments of our Catholic Faith. She never forgot my birthday, or any other special occasion in my life. I treasured her throughout her life right up to the end hearing her sing with the Heavenly Choir right after her death. She taught me to love God,the Theatre, Opera,and how to paint my fingernails and knit,left handed.

I have many memories of our family gatherings over the years, which always included lots of laughter, music and running under the hose!

She gave up a position at the Metropolitan Opera to raise her nine Children with a heart overflowing with love for all of us and our God!

Eternal rest grant her Oh Lord and may the perpetual light always shine upon her, AMEN

I want to express my deepest condolences to the entire family. Alice was a special person and her lovely spirit-of-life will continue to live on through the many people she touched with her presence and grace. I loved reading of her title:”President of the Residents”.

Just heard about your mothers passing. She was such a cool lady and so much fun. She had a full life and Jesus was her Lord and Savior…dancing and singing with him. How wonderful is that!! Love and God Bless.

Every time we cook your favorite crablegs, shrimp & lobster dinner, Liz & I will be remembering you. However, when I get to Heaven & join you, it’ll be your turn to cook! I love & miss you very much, Troy.

Grandma Hauss was one of the kindest, sweetest, loving woman that I know. Even though I didn’t get to be around her a lot I live 3000 miles away I always looked forward to her letters in her Christmas cards. The funniest memory I have of Grandma Hauss? It just happened today! I hadn’t realized that her maiden name was “Lake”….making her last name “Lake Hauss”….Lakehouse! That brought a smile to my face. God Bless Alice Hauss…she’s in heaven watching down on her entire family and friends. We are all so blessed to have had her in our lives.

I am so sorry to hear of your loss. I know that Gram is having a ball dancing in heaven! May God grant you the peace that surpasses all understanding at this time of grief in your life. Remember the good and forget the troubles!

I am so thankful for the years I had with my Mother. She taught me at an early age who God is and continued to inspire me ever since. She was also one of my best friends and for the rest of my life here, I will miss her. I know she had a beautiful reunion w/Dad, Michelle, Suzie and her wonderful parents.

I am very pleased to have had such a wonderful human being as my Grandma. She and Grandpa lived good lives together. Grandma was a very faithful Christian woman who truly deserves to be in Heaven with God.

Rest In Peace, Grandma. May the comforting Grace of God be with the whole of the Hauss family.

I have known Alice since 1961. It has been a privilege to be a part of the Hauss experience. Alice and I were roomates in Medjugorje. One night she shared with me that she couldn’t wait to go to Heaven. Where I am deeply sorry for her families loss, I am thrilled that her dream has come true. See you again Alice….

Keeping you in my thoughts and prayers. We will never forget Mrs.Hauss”s smiling face and sweet smile. God Bless, Atlantic Foot and Ankle Center, Dr.Rayno and staff

May God comfort your family at this sad time and welcome Alice into His Heavenly Kingdom for Eternity!

Mom, really going to miss you, we thought you would be with us forever.

You are a wonderful outstanding women! Love, Moni

My deepest sympathy to the family It was an honor to know Mrs. Alice, she was a wonderful lady full of good energy and positive vibes always, always smiling.

I love her very much

Thank you all for your lovely words of encouragement! I will miss my mother more than ever, but I am content that I shared those final years with her. She totally blessed me since I could ever remember! My family and I will never forget the love and comfort she extended to us all our lives.

We were sincerely blessed to be in our family.We will miss you, Mom! Now enjoy your time with Jesus, Daddy, Michelle, Suzie, Aunt Mona,Uncle Bob,Grandma & Grandpa, and Patrick.We miss them all.

Thank you everyone for your beautiful condolences. I am truly blessed to have been a daughter of Alice Hauss. She gave me so much, especially the gift of faith. I will miss her beyond words but I’ll remain thankful that she no longer struggles to be healthy and that she is finally at peace with her beloved Jesus and my beloved Patrick, Daddy, Michelle and Suzie. God Bless you Mom! I’ll never forget you!

To my “Mommy”…my Number 1 fan at my football games,plays and through out my life. I’ll miss you, but will see you soon as we’ll see each other in Heaven.

I am so happy you accepted Jesus and made Him Lord of your life.

Thanks for loving all us kids, each of us are independent like you wanted us, but better yet, we all know The Lord and all of us are good people to the core, thanks in part to you Mom.

We’ll miss you here on earth, but look forward to seeing you soon.

My only regret is that I never got to see you singing and performing on stage cause I was either not born yet, or too young to be included in the audience.

To the Hauss family.

Many blessings to your family during this time of loss. Please be assured that your mom is resting comfortably in the arms of our Lord and Savior in Heaven. May God Bless You, Love to All.

We love you so very much, you will definitely be missed Grandma. I am so glad I had the opportunity to meet you, you were one very special person. With lots of love, rest in peace. Rich and Jennifer XOXO

We’re so sorry for your loss