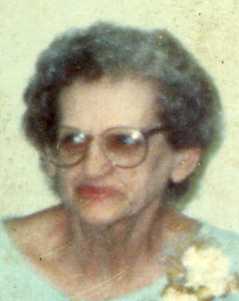 Alice L. Montgomery, 78, of East Liverpool died at the Calcutta Health Care on Monday, December 24, 2007 following a lengthy illness. She was born in East Liverpool of July 1, 1929, a daughter of the late William E. and Helen Gatchell Millbaugh.

Living her entire life in this area she worked as a waitress for 18 years at the former Green Mill in East Liverpool.

Her husband, Ernie N. Montgomery, whom she married on May 10, 1947 survives her.

Besides her parents, a son: Roger Kim Montgomery preceded her in death.

Services will be held at the Calcutta Chapel of the Martin MacLean Altmeyer Funeral Homes on Friday, December 28, 2007 at 11:00 AM with Rev. Norm Eckert of the Beechwood Free Methodist Church officiating.

Hey just mor thing and most of the grandkids will remember this. We used to have fun going to grandmas while our parents played cards we would walk to Dairy Queen and almost everytime we were there we all and there were alot of us used to slide down the steps and boy did we get in trouble for that but we kept doing it anywya. And one more thing that happened while we were there we walked down the road and thoguht we found a haunted house so we were playing there and I dropped my cousin on his head so they had to take him to get stitches just the memories of grandmas house that came to my mind and I wanted to share with everyone.

I wish I could be there with family at this time of need. Remember everything happens for a reasons and at least see is in a better place pain free now. I love all of you and try to keep your chin up.

I’m so sorry to hear of your loss, especially at this time of year. So many memories come back to mind from Haywood & Center St., but I’ll always remember your mom as being very nice to all that came to her house to visit or play. Stay strong and cherish your memories.