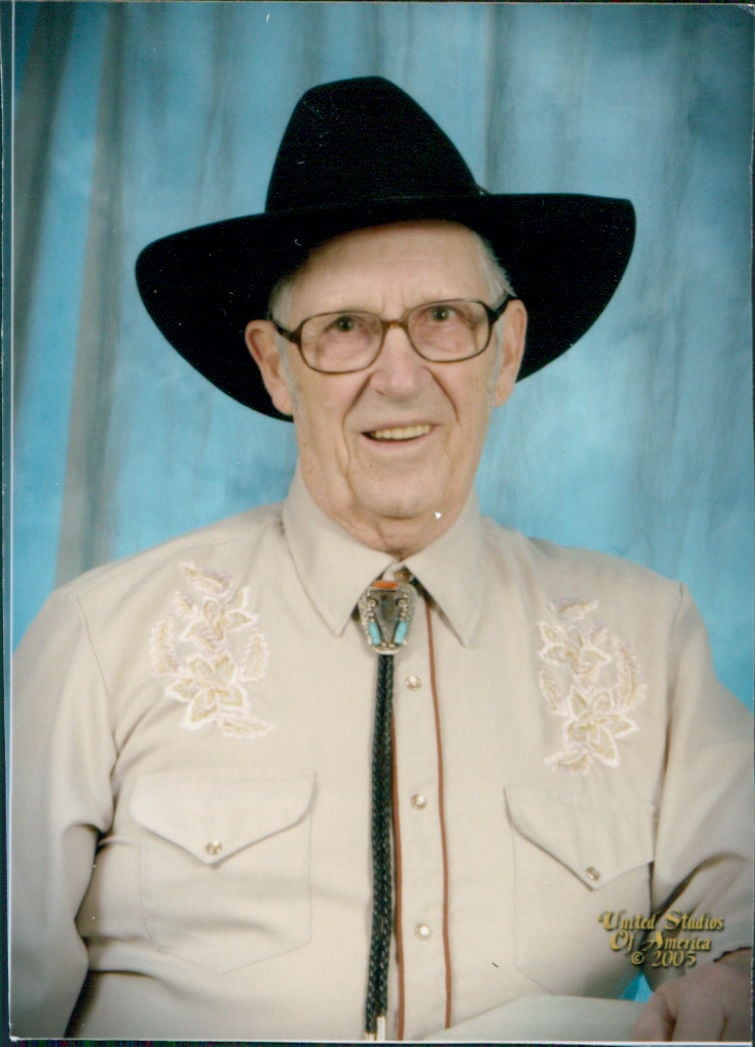 Owens, Alfred Paul “Tex” of Bellaire was called home by his Lord and Savior on February 9, 2014 at Liza’s Place in Wheeling, WV. He was surrounded by his family and friends.

Tex was born July 1, 1922, the son of the John and Mary Mentz Owens. He was preceded in death by his parents and three brothers, John Owens, Tom Owens and William Bill Owens, and his first wife Hazel Jean Spencer Owens Fletcher.

Tex was very active in the Shadyside Church of the Nazarene. His commitment to the work of the Lord was clear for all to see. He made many trips with Men in Missions to Mexico, the Bahamas, South and Central America and the Navajo Reservation in Arizona. He also served as a missionary in Papua New Guinea. He worked for many years at the Sun Valley Indian School in Sun Valley, AZ, where he also served as an Aux. Deputy Sheriff and the pastor of a small Nazarene church on the Navajo Reservation.

Visitation will be held at the Bauknecht-Altmeyer Funeral Home & Crematory, 441 37th Street Bellaire, OH, Friday, February 14, 2014 from 2-4pm and 6-8pm and Saturday, February 15, 2014 from 10am until time of funeral service at 2pm with Rev. Dennis Hancock officiating.

Memorial donations may be made to the Shadyside Church of the Nazarene or Liza’s Place.

Share your thoughts and memories with the family at altmeyer.com

What a joy and a blessing it was to visit with you and Tex at Liza’s Place. I was glad when he woke up to sing “How Great Thou Art” with me; but, I was sorry that he had left Liza’s Place before I returned the following Wednesday. I was truly hoping to sing “Good Night and Good Morning” for him, since you said that he had mentioned liking that old hymn. I’m sure that the Lord will let him hear it on Saturday.

I am so sorry for your loss. My thoughts and prayers are with you all through this difficult time.

I am so sorry for your loss.My thoughts and prayers are with your family…..

I enjoyed working for your dad he had alot of interesting stories he told me he will be missed by many. RIP Mr.Owens

May your memories of Alfred Owens, give you peace, comfort and strength…

Rest now in the arms of our Lord your work on earth is complete. I thank you for your service to our Country and my Freedom. You will not be forgotten.

My heart is full of sorrow for your loss.May my prayers help ease the pain you all must have at this time.All my love, David

Nice picture the man I remember.R.I.P

Our deepest sympathy to the Owens Family. From The Kraus Family

Our thougts and prayers are with youns as you go through this hard time.May The Good Lord comfort youns.

Penny and Family, I’m so sorry for your loss! My thoughts and Prayers are with each one of you.Your DAD, was a great guy. I’ve known Penny and your dad for many years and some of the others too.

So very sorry to hear about your dad. He lived an exciting life. Now he is resting pain free. He will always be with you Betty,Rosie,Penny,and Bonnie. Love to my friends.