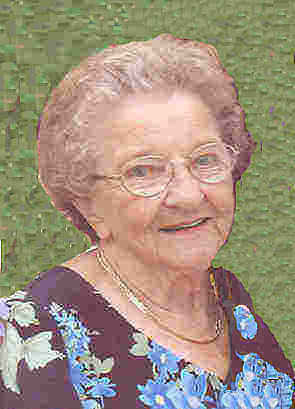 She was born August 14, 1925 in Maynard, Ohio a daughter of the late John and Rose Srp Strauss.

In addition to her parents, she was preceded in death by her husband, Joe Mesich on March 15, 1993, a son, Joseph Mathew Mesich, three sisters, Helen Mailoux, Julia Black and Martha Hesson and a brother, John Strauss.

Family and friends will be received at the Bauknecht-Altmeyer Funeral Homes & Crematory 3900 Central Avenue Shadyside, Ohio on Tuesday from 2 to 8 pm.Private funeral services will be held at the convenience of the family. Interment in the Mt. Calvary Cemetery in Bellaire, Ohio.

Share your thoughts and memories with Agnes’ family at altmeyer.com.

Agnes was such a sweet lady! I am so sorry for your loss!

Dear Martha: Please accept my sincerest sympathy in the loss of your mother. May God be with you and comfort you in this time of sorrow.

Love and Prayers Bill and Trisha