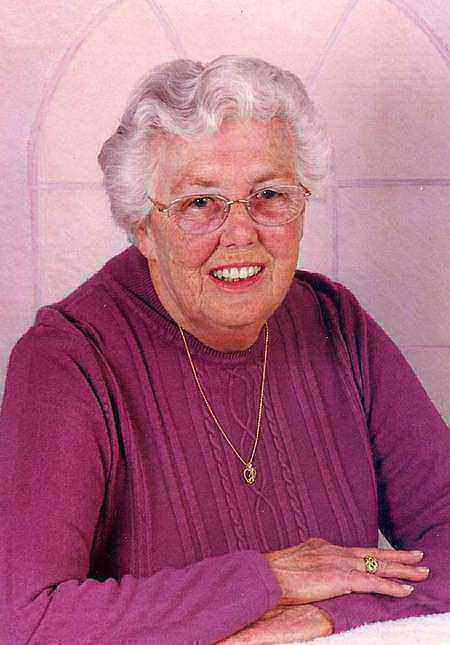 RITCHIE, Agatha “Aggie” Cain, 75, of Wheeling, WV, died Sunday, August 19, 2012 in OVMC.
She was born February 2, 1937 in Glen Dale, WV, a daughter of the late Guy and Jeanette Cunningham Cain.
She was a retired employee of the IGA and Foodland Stores and an avid card and euchre player.
In addition to her parents, she is preceded in death by her husband, Harry H. “Bull” Ritchie Jr.
Surviving is one sister; Deloris J. West and her husband Gene of Huntington Beach, CA; two nieces, Debbie Herndon of Minneapolis, MN; Kim Pinkham of Huntington Beach.
Friends received 11:00 a.m. until the time of the funeral services at 1:00 p.m. Friday, August 24, 2012 at the Altmeyer Funeral Home, 1400 Eoff Street, Wheeling.
Interment in Halcyon Hills Memorial Gardens.
Offer condolences online at altmeyer.com

and the last time I saw her at our class reunion, I was concerned for her. She and Bull had many good times with us. We had known them

going back at least 70 years. May God Bless her remaining family. Jim and I send our love to them and know that this earth life is a second estate in the middle of our 1st and our 3rd like a 3 -act play.

Aggie was an oustanding athlete at Wheeling High School. She had a positive atitude and was friendly to everyone,

Dear Deloris and family so sorry to hear of your mothers passing. We are out of town and will not be able to attend the funeral but will have you in thoughts and prayer. Your cousin DONNA

Deloris & Gene, So sorry for your loss.It was nice you were here and got to be with her. Love & Prayers, Lou

Deloris and Gene, I’m so sorry for your loss. It was nice seeing her at Paul’s.

I am so sorry for your loss! Aggie was a wonderful neighbor to my in laws. I always enjoyed visiting with her, when we visited. God Bless you!

My thoughts are with you at this sorrowful time. Remember the good times & be thankful that you were here with her at this time. May God bless you & your family. Love Bert

Thanking God for a friend from many years ago. May God comfort you and give you many wonderful memories.

We all loved Aggie and will miss her very much. Her late husband Bull was a close friend and a great associate at the funeral home.Bull gave us many years of devoted service for which I am greatful. Jim Altmeyer