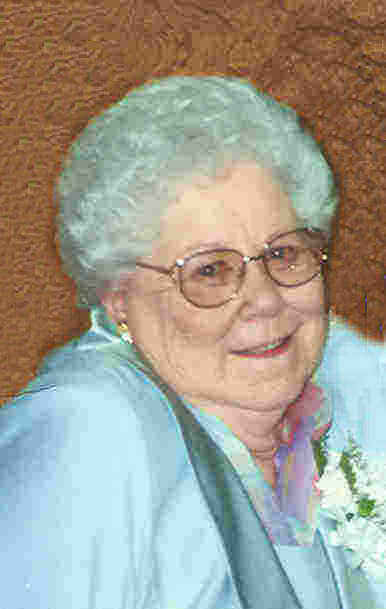 Ada was born September 22, 1923 in Bellaire, Ohio, a daughter of the late William and Hortense Hallett Newhart.

She was a member of St. Mary’s Catholic Church Shadyside, Ohio.

Preceding her in death were her husband Michael A. Petronek in 1990, a brother William Newhart, two sisters, Wilma Heagney and Mildred McMillan.

I am so sorry about the loss of your mom. I only read the paper occasionally. Today, Saturday afternoon, I saw her obituary and my heart immediately went out to you and your family. I felt a true loss of someone that had touched my life. Your stories about your mom always entertained me and meant so much more when I got to meet her and get to know her better. I regret that I became aware of your loss too late to pay my respects to your mom and to be there for you, but I would like you to know that I’m thinking of her, of you, your sisters Marcia and Judy, and all in your entire family. Many thoughts and prayers are coming your way.

I have so many wonderful memories of your mom and dad. There was never a dull moment with your mom while we were in our teenage angst! Please know that you are in my thoughts and prayers… May your memories comfort you during this difficult time.

sorry to hear about your grandma mother I know how much she meant to all of you. You are in our thoughts and prayers. Jeff & Mandi

Fond memories of your mother since kindergarten. Thoughts and prayers to you and your entire family. Respectfully, The Ripoly Family.

I watched the movie and it was like a rainbow in a thunderstorm for me. I smiled, I laughed and I cried all at the same time. So many of the memories were very clear for me the other favorite daughter at times. I am so sad to not be there with all of you to celebrate Mom’s life and to cherish the memories and love of a woman who loved so well. When I see the pictures of Mom and Dad together it makes me smile because I know they are together again dancing. I’ll bet Dad even has his own teeth now. I love all of you and the times of my life spent with you and Mom and Dad were some of the best memories of my life. My favorite Thanksgiving was in Mom’s dining room when Richie would only eat cold hot dogs and cheerios and Mom said “oh, leave him alone, he’ll be fine.” Thank you for including me in your family.

I am so sad to hear about Aunt Ada. I have so many great memories of our family being together. My thoughts and prayers are with you.

I am so sorry for the loss of your mother, this is so hard. Your faith will help you. You and your family are in our thoughts and prayers.

im sorry to here about your mom.You guys are in my prayers

Marcia and Mike: We were very saddened to hear of your loss. Our thoughts are with you and your entire family. The Memorial Video showed a very happy and fortunate woman surrounded by a loving family. You cannot ask for much more than that. Please feel free to contact us if there is anything we can do.

Mariann, so sorry to here about your mom. My thoughts are with you and your boys. Didn’t realize Marcia was your sister. I’ll say a prayer for you all. Take care.

My thoughts and pryers are with you all. I will miss grandma Ada . It was not the same when i went to work today. I never forget her smile and her laugh or the way she lite up when the kids came to see her. And of course i wont forget my butt whipin…. She was a very special lady and i will never forget her, she has made a difference in my life………….

God Bless She will be missed

Our deepest condolences to your entire family. I wish I could have been with you all in person but my thoughts and prayers have been there.

Please accept my deepest sympathies at the loss of your mother. My thoughts and prayers are with you at this sad time.